Yvette is a lacemaker, Mauritz is a woodturner, and Norma is a quiltmaker. 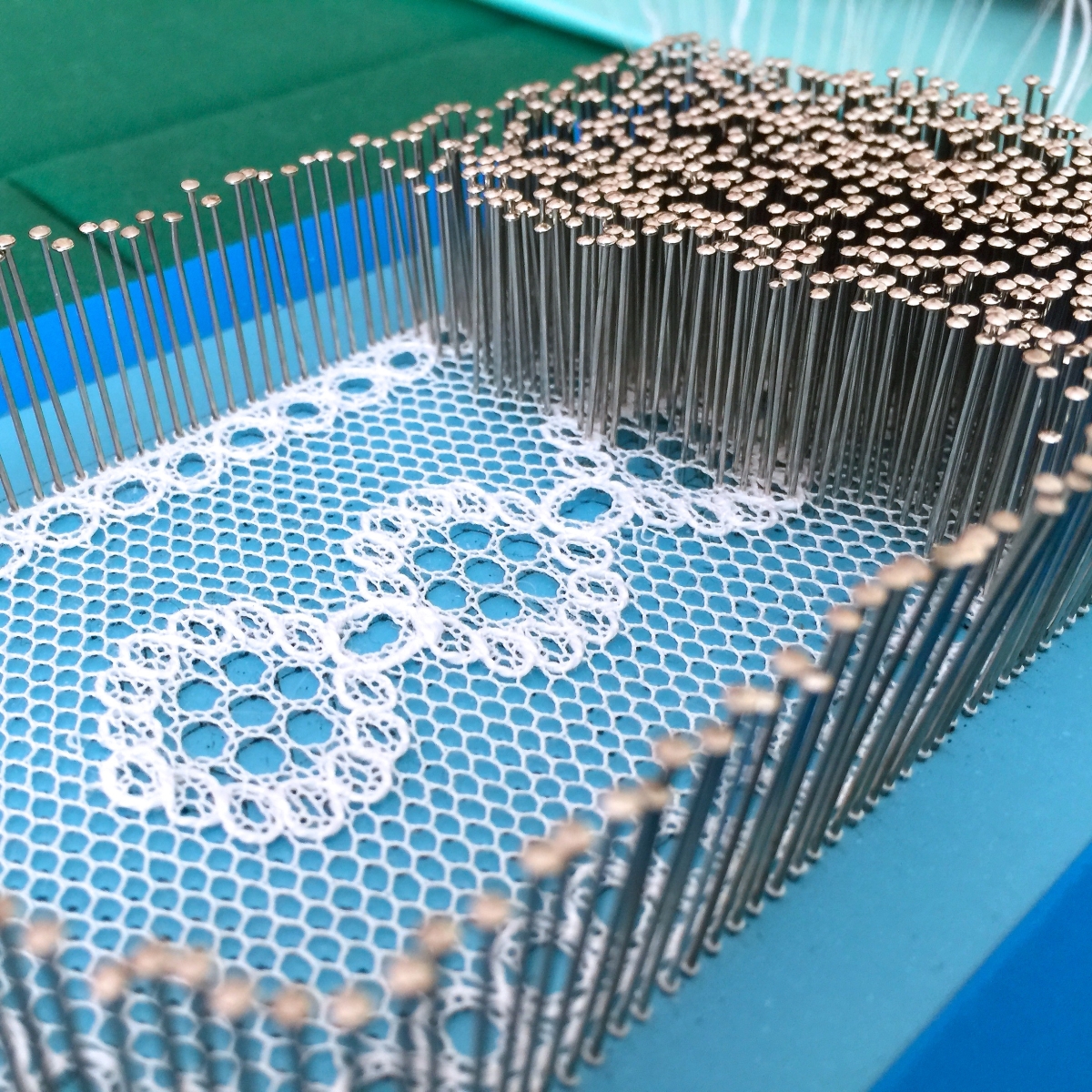 Yvette is a bobbin lacemaker from New Zealand.  Her interest in lacemaking started as a young child while visiting a Franschhoek lacemaker during a family holiday in South Africa.  The lacemaker showed her a few Torchon lace stitches and even allowed her to work a few stitches on his lace pillow.  She was mesmerised by the process, and so started a lifelong love affair with bobbin lace. Yvette’s parents gave her a bobbin lace book for Christmas and that sparked the beginning of her extensive lace book collection.  By the time she made her first stitch – many years later – she already had a solid reading knowledge of bobbin lace.

Growing up in a creative family – where art and making is a way of life – her love of handmade things was nurtured from a very early age.   But  her interest in lacemaking was put on hold while she first qualified as an attorney, notary and conveyancer, and then as an accountant.  After migrating to New Zealand and settling in her career, her time for lacemaking finally came when a friend invited her to a bobbin lace meeting in Cambridge in 2010.   From there, passion drove her progression.

Yvette makes a variety of bobbin lace types, including Torchon, Bedfordshire, Idrija, Flanders, Binche, Bucks, Chantilly and Tonder.   She is passionate about keeping  the craft of bobbin lacemaking alive, and has a website and blog featuring videos and tips for beginners.

Yvette is a member of Interlace Oceania, the International Organization of Lace Inc.  and she belongs to the Adventurous Lacemakers online community.

Yvette had her first solo lace exhibition during December and January 2019/20  at ArtsPost Galleries, Hamilton, New Zealand.  This was followed by an Interlace Oceania group exhibition as part of the 25th anniversary exhibition, Puntaires de Girona in Spain.

Mauritz is a woodturner from New Zealand who came to woodturning late in life – after retiring from a long career in tertiary education management.  He enrolled for his first class in woodturning during his late sixties – with the aim of helping daughter, Yvette, to make bobbins for her lacemaking.

Woodturning opened a whole new world for him and it gave him a new enthusiasm for life.  He fell in love with woodturning and initially made a range of bobbin lace tools for Yvette.   But he soon got side tracked by a broader woodturning vision when he discovered joy in the hidden beauty of wood, and the pleasure of turning vessels and hollow forms.

The sense of life in wood – the feel, the grain, colour, smell, and moisture – inspires Mauritz to create and he likes the wood to determine the form.  The lathe is central to his work, and he delights in the power of the lathe to quickly change forms while producing beautiful objects, and a serendipity of shavings.

Now in his mid seventies Mauritz still explores his craft by attending workshops and conferences in Australia.  A recent visit to Japan influenced his aesthetic of simple, subtle, and restrained forms. Mauritz is a member of the Waikato Guild of Woodworkers and the American Association of Woodturners. He is working towards his first exhibition at ArtsPost Galleries in Hamilton – during December 2019.

Norma Slabbert is a quiltmaker and writer from New Zealand who grew up on a bushveld farm and a mission station in Lebowa.  She started doing fabric collage and making quilts in the early eighties, while working as a pre-school teacher.  Her early work was bright and playful – inspired by children’s art.
During a mid-career break, Norma backpacked through Europe to visit major galleries and museums and to study art and quiltmaking.  She researched quiltmaking at British museums, libraries, and quilt shows, and the experience inspired a lifelong commitment to art and quiltmaking.
After returning from Europe, Norma’s passion for art led to a career change and a position as an art gallery curator.   As curator, she initiated and curated a number of quilt exhibitions in the city gallery – which was groundbreaking at the time.
Norma returned to university in midlife, to fulfil a passion for writing.  The Honours in Journalism had an impact on her quiltmaking and after qualifying as a journalist, her work became darker, more political, and grounded in reality. Her quilts often reflect on world matters, the realities of daily life, and emotional truths.
Norma and her family migrated to New Zealand during the late nineties, which also had an influence on her quiltmaking.  As a migrant, her work comments on coming and going, place and displacement, and the space in between.
Now semi-retired, Norma spends her days on all things related to quiltmaking: doing the stitches, reading, researching, judging, exhibiting, and writing on the subject.   Recent highlights in her quilt journey were visits to the 2015 and 2017 Tokyo International Great Quilt Festival, in Japan.   She has published a number of books and wrote for New Zealand Quilter until it ceased publication.
Norma was the 2012 recipient of the Aotearoa Quilters Scholarship Award, while she worked towards her second solo quilt exhibition, The Walled Garden. Her third solo quilt exhibition, While We Stitch, was shown at ArtsPost Galleries in Hamilton, during September 2016.  In 2019 she showed a new quilt series, Old Skills, New Quilts at ArtsPost Galleries – with her family under the umbrella name, Family Making Things. Norma’s fifth solo exhibition, House Home Place, was shown at Wallace Gallery Morrinsville from 1 October – 6 November 2022.